a picker truck could easily be modified to print cement for 30′ reach. or more efficient / better a portable delta style concrete printer because it can do the center where picker truck would be unless tandem printing was used.

this coating is amazing but regular cement on the outside, tamperd dirt or foam should suffice for adding strength.

Aircrete looks like a good option to make domes though it is more brittle can be squished at 40-80lb and can be made to be bendable. can be covered with regular cement after for harder finishes/strength and is easily repaired it can be half the cost due to foaming agent and air mixture. The materials can literally be made for free with some time and effort finding the right rocks / dirt. paper / styrofoam is also an alternative.

have seen shampoo used as a foaming agent, not sure if it would effect strength though. shaving cream like texture is desired and long lasting. special pnumatic foam makers can be built from 3d printer or plumbing parts 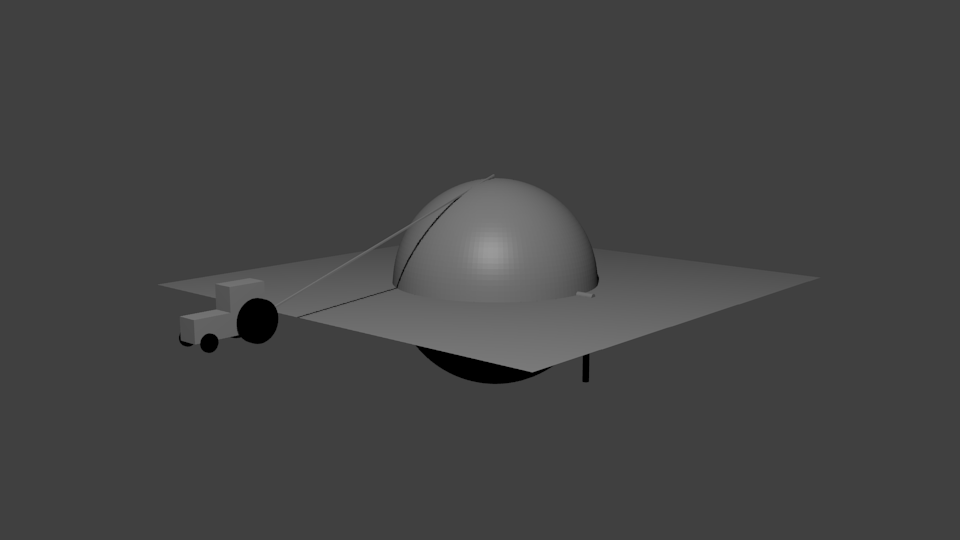 a gin pull can beused instead of tractor also it would make sense to spin it from other side with a pully and wire lightly taped to the inside. one way needs half the length of cable if you have tow ropes to use for tractor method. 2′ aluminum flashing may be used to add strength where the cable goes.

covered withdirt, the inside could be supported with a T welded to the roof.

Once dried might even be light enough to lift by hand with 4 people if you can figure out how to spin the arms other ways(possibly large wheels on the pivots and people instead of tractor and a lifting beam above) after lifting a bit to break it free from mold it should rotate nice with some added soap water after drying with its smooth surface.

Use 2 tractors if it is being tricky (put 2 cables in one shorter for initial lift to get it rotating easier) or ginpulls on the lift side.

4×4’s or 6×6 with one peice of rebar in the center to make cleanup easier can be made with concrete, probably able to support 1-2 ton loads as a guess. makes a nice longterm building material when done and protected properly. figured a cement deck replacement would be good idea if you get good price or have your own cement truck.

if made thick enough aircrete will support a tampered dirt roof probably best option to keep both top and bottom insulated (piles may be needed as part of the bottom shell pour if covering with dirt ? ), or coat with foam, or other types of insulation. otherwise insulate well from the inside if the aircrete is not enough insulation value, seeing the flame tests looked though bright red. maybe it conducts cold still well at lower temperatures if ground around home is frozen.

bottom can be thinner but its better to do it properly the first time plus it needs a good bit of insulation.

Cement truck is usually 8 yards^3  so 216 feet^3 that means 5 trucks worth for bottom shell and 4 for the top shell. typically concrete loads are $800 delivered here in the oilpatch.

3 lengths of 20′ pipe could be screwed together to make 60′ with some anchors for the cement to adhere to the pivot or place smaller pipes in just the sides with large anchors and rebar. one would be used for skidding the structure. also having it on skids would make it non perminent for less tax/insurance but no basement ?.

if you really wanted the dome could be spaced from the bottom more and you could have a house that opens during the nice days.

paper tubes could be installed to dry the dome out faster and a fan placed on the ends.

some aircrete mixers can do readymix concrete and foam on the fly(green dragon was the name in a video on youtube) as you disperse it.

c-can shipping containers for home storage could be poured at a fraction of the cost with proper jigs.

was thinking about using aluminum flashing to make some panels and square tubing for frame with plastic pegs to join inner and outer that get cut off to release the forms after.

i would imagine paper mache or patches of cotton soaked in concrete would be enough to make a dome aswell with less concrete than pouring.

an outfitters tent soaked in concrete would probably stand up without support ropes after. 8x10x3’walls is easy one to setup and can be connected easily for 800 dollars. there are larger versions too basically just build a pit put in 2 or 3 bags of concrete mix and add tent untill soaked and string up with ropes(maybe replace with cables) or place over a tubing frame to get it tight.( might even be easier to add mix ontop after tent has been set on the steel frame.) if the tent is new and has brown canvas roof with white sides you may have to weather it some to get the oils out of the roof. canvas does soak up water easily on the walls and the all white version is probably best choice. also aircrete and dirt can be added to the outside before putting dirt on it for extra insulation.

https://www.alibaba.com/product-detail/Small-Brick-Making-Machine-Clay-brick_360144171.html 2 of these could make 1000 bricks an hour, still would need curing but may make some nice underground or dome structures / sheds.